There are lots of really cool all-in-one underwater ice fishing cameras for sale commercially. Unfortunately most of them cost about $150 minimum (without most features), and more like $300-$400 for a modern brand name system. I decided to assemble my own from parts. My system ended up consisting of a vehicle rear-view back-up camera, 50ft RCA+power extension coxial cable, 12v portable digital video recorder, 7 inch LCD monitor, and a 12v 7amp hour sealed lead acid battery. Everything is done with NTSC video over RCA coaxial cable. My system ended up being comparable to an older generation low-end Aqua Vu like the Micro Stealth 4.3 ($200++) with the difference that my system can record and display video from 2 underwater cameras at once. I tested them head to head out on the ice and they are very similar in functionality and quality. The Aqua Vu's screen was easier to see in direct sunlight and it's much lighter and easier to carry around. 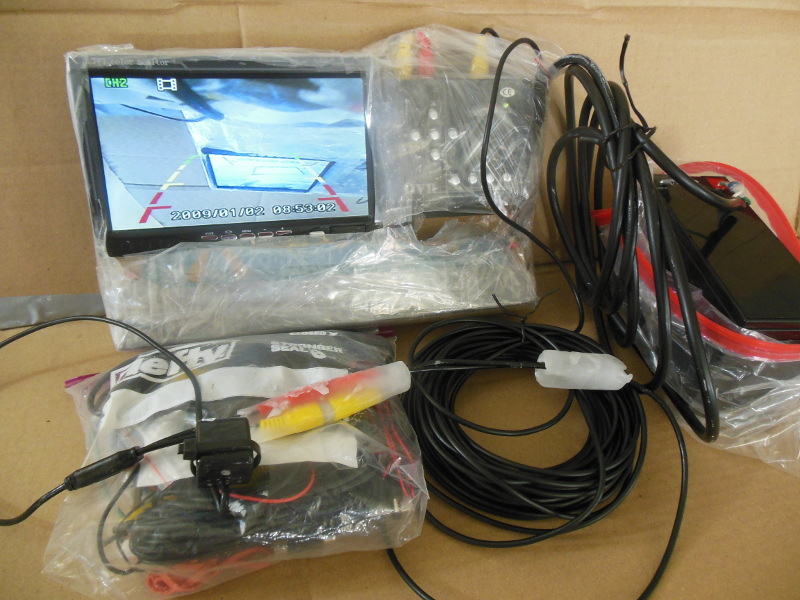 The waterproofing was the interesting part, otherwise it was just all plug-and-play w/RCA cables and a bit of soldering 2.1x5.5mm DC power barrel jacks. My first step was removing all screw holes from the camera by filling with baking soda + super glue (no waiting around to cure like epoxy). Before spraying silicone conformal coating over the camera I cut a tiny circle out of masking tape to cover the lens. I then sprayed everything a handful of times over three days. For the RCA connections in the extension cord I also did one spray of silicone conformal coating but most of the water proofing comes from melting paraffin wax and casting it as blocks around the standard RCA plugs. To do this I cut up some cardboard tubes and used them as molds around the plugs/cable. This was very janky looking but it worked for many hours down 15ft underwater. It might not work well above water for any long (tens of minutes) period because the RCA coax DC injector bit get hot enough to soften the wax. But easy removal is an upside compared to hot glue or epoxy. I attached everything to some scrap cardboard by poking holes and threading zip ties. I wraped it with some plastic and packaging tape. 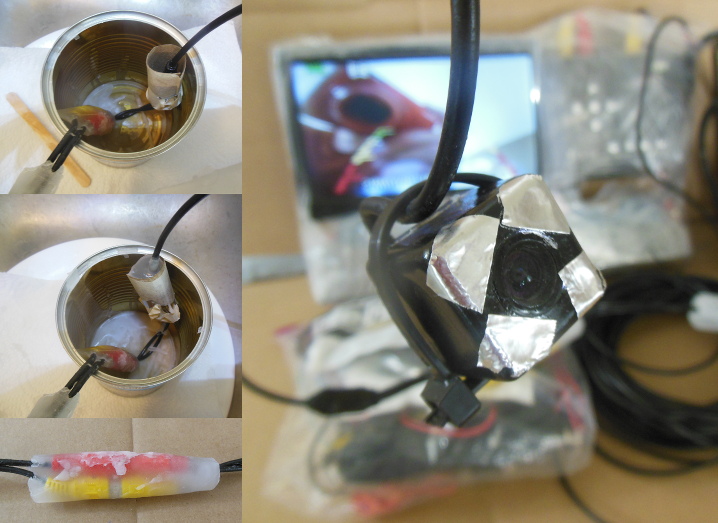 I ended spending about $125. If someone tried to replicate it they might have to spend more because they didn't already have the spray silicone coating, a 12v charger, or bins full of DC barrel jacks, or an old power cord from something broken to repurpose for the battery cable. For this amount I probably could've bought a smaller chinese device already "assembled" but such devices don't have the capability to record video. And unlike my setup they cannot use two cameras at once for 360 degree vision. The only downsides of using such cheap ($5 shipped) cameras was the they have the vehicle back-up lines overlayed on the video. It's aesthetically displeasing but functionally it makes very little difference. Video quality was about the same as the $300 commercial system but when I use the 50ft extension cord I do get slight interference lines. I aluminum taped over the very bright white LEDs on the back-up camera since I couldn't disable them.